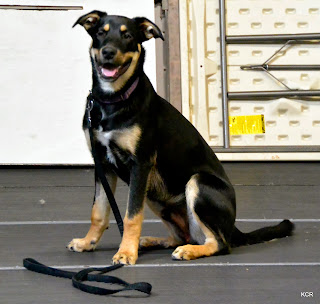 The basis of a good skijoring dog is a good obedience dog!  Not only do you need a dog who can listen, but you need a dog who is confident in their abilities.  Burger excelled at puppy class, but that was with a lot of work too!   Every day before he eats, he gets to practice his skills, and then we feed him.  It just becomes part of the routine, and we end up with training time built in to our busy days. 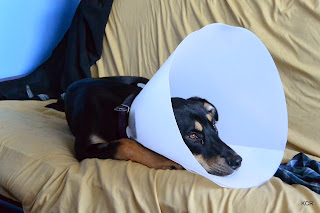 
We aren't interested in breeding our dogs, and getting Burger neutered before the snow came was important to us.   During this dry fall weather, his stiches will heal and he will be good to go once we have snow!  Another plus, is that Burger being ball-less will make him a less likely target of attack from other intact males we may meet on the trails. 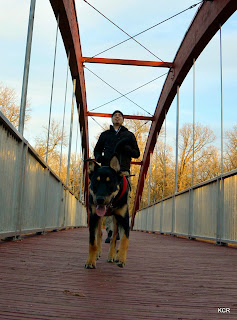 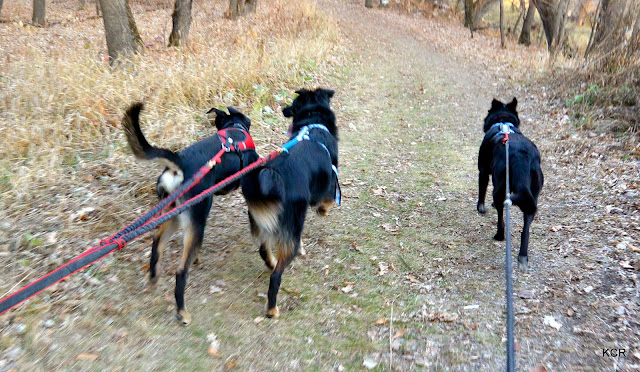 Burger is about 6 and a half months old now.   To date, Burger has been out with the chain broom, solo and with the Young Guns.   He has also been along for some of our slower scooter runs, and had plenty of exposure to life in harness.  Now that he's healed up, he's ready for some pulling power!

We did some light cani-cross training with Burger, as this way we are still helping him, but he's getting used to pulling our weight on a run.   We ran on trails that we walk on regularly, so we know the distance, and we know what to expect.

In total his first cani-cross was about 3k.  He was still pulling by the end of it, and we took two breaks to praise him.

During the run we worked on "Line-out" and "Hill".   Both are important behaviours we want our dogs to perform.   Burger ran solo, and ran with both Riv and Belle.    He's all read wheel drive, this is going to be a fun winter once he's old enough to really dig in and pull!

Welcome back snow!  It calling for a overcast, cool day.  So we headed out to the lake country in the hopes of finding some snow!   Burger picked up the energy from the Young Guns, and really let off some steam!  His stiches have all healed up so he was good for a nice long run!  Bring on more snow!  Burger is so ready!

Cani-cross. No pictures today.  Did a really long run with Burger in Canicross.  Too exhausted to post much more than that!  He's really coming along well, and we are working on LINE OUT, and GEE and HA during our runs. 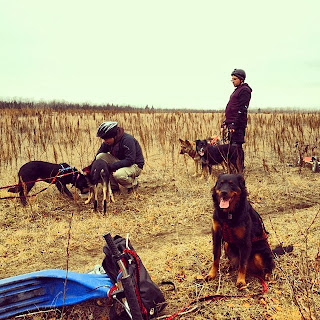 Our friend Doctor Carly, took this picture today while we were watering the dogs.  Today was the first day that we hooked Burger up to the scooter.  We kept the distance very short, and the speed wasn't too fast.  It's common for people to allow their young dogs to run too fast, faster than the dog can handle.  Doing this undoes all that careful confidence work you have been doing with the pup!
So we kept it short, and sweet. This was a soft trail, nice and wide with very few turns.  We wanted him to know he can do it!   We have some video footage here.

Burger's first time with the sled!  We got snow!  So excited!  Burger has never been out with the kicksled, he's only seen them leaned up in the garage and has never taken any notice of them.  I took him out today to get some experience with the sled.  The sled make strange noises, as it glides along the woods.  The earlier work of asking Burger to drag chains and branches.  He didn't seem to care about the sled one bit!

Running the dogs at night! No pictures, just blackness!  I neckline Burger to the gangline tonight, and ran the Young Guns out in front of him.  I made sure to keep the speed fast enough that he wasn't going to get caught up in the line, and slow enough that we weren't dragging him.  So we pretty much went the speed of Burger.  Which was still a good speed.  It was so beautiful to be out at night, with the stars above, fresh snow falling, dogs out ahead of me, and not a sound at all.  So beautiful, and so happy that Burger can join in this with us.

Our first ski of the year! This is it!  What we have been training Burger for all along... skijoring season!   We got word that the trails out in Birds Hill Park were skiable, so off we went!  We hooked Burger up off we went!  He's a real little machine!  We are so very proud of him. Click here to see the video!
We made sure to go at Burger speed again, and took plenty of rests so he was able to rest.  When he got bored or resting, he lept at his harness and whined, wanting to go more!  So awesome! 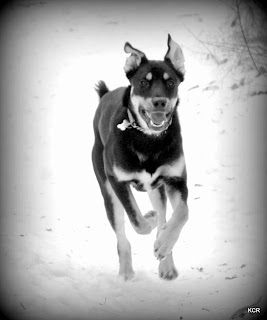 The importance of free running.  Today we took all the dogs out for a free run. It's still very early in the season, and we want them to have lots of chances to run, and play together.  There will be more skijoring other days.
It is very important for puppies to free run, so they can learn to use their legs, and bodies to excel and slow themselves.  Important skills Burger will need down the road.