Skijor With your Dog: Second Edition

The combined efforts of a  professional writer, and a professional dog driver, Skijor With your Dog, is easy to read, and full of skijoring knowledge. The book covers everything from falling, to competition tips.

Similar to the first version, the book has many diagrams and pictures to illustrate their points. A nice change from the old book, are the new pictures, many of which are full page.

The book offers a through section called "Potential Problems and Possible Solutions". Which is a must read for anyone who is feeling frustrated that their dog just doesn't seem to "get it". If you are having problems getting going, it is worth buying this book, for this section alone.

The book takes you through everything you could want to know about skijoring. From the early history of the sport in North America, to picking your skis and your dog, to racing and winter camping. There is something for everyone in this book.

This is an easy to read, informative book. Rather than just simply a step by step, how to guide on skijoring, the rationale and reasoning behind the training and choices are presented.

A few take aways for me from this book:

I enjoyed the section at the back of the book, on a suggested training colander. It has given me some ideas about how to improve my own training schedule.

Training Philosophy. I am always thinking about this, and trying to learn from my dogs. I enjoy a book like this, that teaches you and gets you to think.

Tales from the Sophomore Skijorer: Getting Started

Getting Started
By: Carly Lodewyks

I’m told I started skiing almost before I could walk. As a kid I spent many hours cross country skiing around Manitoba with my family. When permitted, our dogs came with us and free ran the trails as we skied.  There was talk about this sport called skijoring but we none of our family dogs were ever trained.

Fast forward several years to Dec 2011. My husband and I adopted our first dog together from the Winnipeg Humane Society. Ember was 4 months old and a bundle of energy + puppy brain. From the time she came home with us I knew I wanted to give skijoring a try.  I did some internet research on skijoring in Winnipeg and came upon Snow Motion’s website. I then patiently waited until the following fall when they were hosting their next beginners workshop.  By this point Ember was about 70lbs of athletic mutt who loved to run and pull. I had a feeling she would be perfect for the sport. 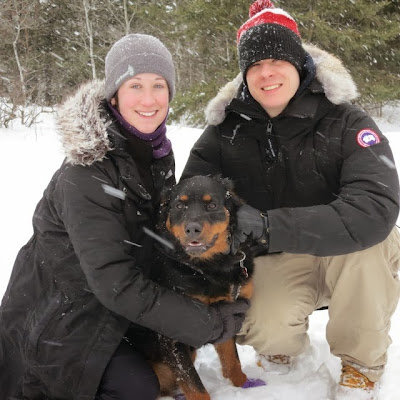 The workshop was a fantastic learning experience. We fit Ember for a harness and I came home full of ideas to get her training started.
We went slow at first. While out on our walks I began using “Gee” and “Haw” as we turned corners. And “whoa” when we came to street crossings. In a very short period of time Ember began to understand what these terms meant and I started to use them as commands to dictate our path. I strapped on my belt and gang line to work on “line out and hike”.  I could see things coming together very quickly and couldn’t wait to get out on skis.

Finally the snow came! Our very first skijoring run was by ourselves at Bird’s Hill Park and she did great- at this point I knew both of us were hooked!
We spent the winter last year skiing our hearts out with Snow Motion, the Oxford Dogs and the Blonde Bullet. An extra long winter meant we had great trail conditions until the beginning of April. We raced in the Snow Motion Classic race in February and placed 2nd in the Novice 2 dog category. 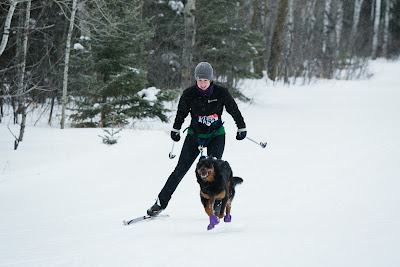 Looking back on our first season I made the following observations:

- like most dogs, Ember LOVES to chase and is extremely motivated to catch the team up ahead. I’ve clocked us going nearly 30km/h running down Kevin and the Oxford Dogs on the trail. In some ways this is great- she is strong, runs hard and we have crazy amounts of fun. But I have always been worried that she would just be trained to chase, meaning we would not be able to go out by ourselves for a run.
One of my goals over the summer/fall season has been to boost her confidence while running alone.
When the weather cooled off in August we took to the trails on our scooter and I tried to get out on our own at least once a week. During these runs I made sure to keep them short and fun with lots of praise.   If she slowed down we stopped for a bit until she was pulling on the line to go again. I let HER make the decisions
Kev also suggested I try letting her pick the trail- this was amazing! I could see her waiting for me to give a command as we came to a fork in the trail and when I instead encouraged her to keep going where she wanted, she accelerated into the turn. Great positive reinforcement! 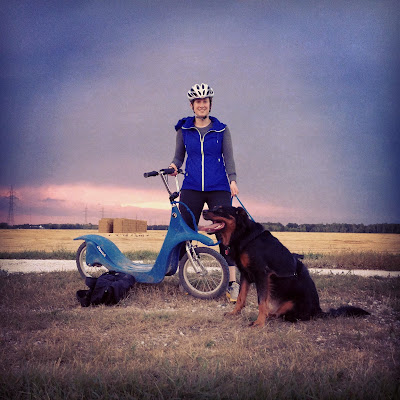 - Saturday morning we went out for our first skijor of the 2013-2014 season and I was pleasantly surprised to see Ember pull strong and steady for nearly 5km without slowing down. It was so gratifying to see our hard work paying off.
I have learned that to have a good pulling dog, the running needs to be the reward. It takes some time to get there but it is possible!

- Ember struggles with leash reactivity. I was initially quite concerned about how she would do in harness around so many other dogs. At first it was tough and I had to keep some distance. But as she got used to the dogs and realized that her job was to work around them and not play with them she has been great. Occasionally we still have incidents but if everyone respects the “no contact in harness rule” everything goes well.

In the end I think the skijoring environment has actually improved her reactivity because she has gotten used to working in harness around other dogs. 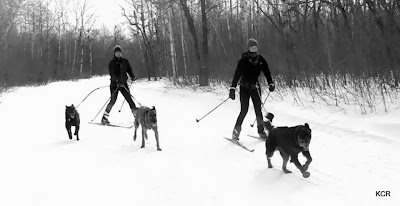 - Lastly, I have learned it is easy to over do it.  The snow comes, the conditions are great, you have some free time, and you go for a really long ski.  Great for you, but not so great for your dog. As Kev has mentioned it is important to quit before your dog is exhausted. You don’t want them to associate skiing with exhaustion. Building up to longer distances is important.  My second goal for this season is to work up to a non-stop 5km. After our runs this weekend, I think we are well on the way!

Well, there you have it. I could probably go on for pages and pages about what I have learned in the last year.  Becoming a mushing team with my dog has been one of the most amazing experiences and I am totally in love with every aspect of the sport.
There is nothing like the connection between musher and dog.
Get out there and give it a try! You won’t regret it! 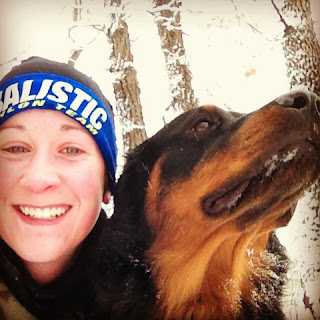