Want to start a skijoring club?

So you want to start a skijoring club!  Great!  You got some things to think about!  I borrowed this template from Snow Shoe Magazine.    Check them out here:  http://www.snowshoemag.com


What are your goals? What is the purpose?


To teach lessons? To promote the sport? To race? To organize? To commune with nature, mushers and dogs?  Know where you are going, or have a general idea before you start out.


Contact other skijorers.   Look on Facebook, ask mushing supply companies.  Get a group of enthusiasts together who are interested in organizing a club. Set a time and place for the first meeting or event. Send out emails, contact rescue allumi groups and Humane Societies.  Dog training places are another great source of potential skijorers.  Be all over Social Media, and they will come!

Create Rules and an Agenda


Create a set of informal rules for general group operations and establish membership criteria and benefits. Establish a regular schedule for get-togethers.  As this is a winter sport, think about how often you will be out, and have another part where people can meet up for a coffee or something after a run.

You might decide to elect officers: President, vice president, treasurer, and secretary.  If the club is collecting money or dues, it's important to have a person in charge of collecting and keeping track of this!


Scheduling events and meetings in your area can quickly increase participation.  How will you deal with new members wanting to join?   Will you be holding a workshop?  Or will you be looking for people who already know how to do the sport?


Communicate with club members!  Allow them to communicate with each other as well.  This will encourage the group to be strong, and support each other.  A Facebook group is a great way to do this, as people don't have to be getting a ton of e-mails from the active members.   Some of us type faster than others, and some people simply don't want their e-mail inbox filled up!  Be open to  new ideas and suggestions from group members. .


This sounds super scary and formal, but examine the by-laws of other skijoring clubs for examples.  They rules should be clearly stated on their websites.   For a new group, start with something short and simple. Include the following:
Posted by Unknown at 18:30 No comments:

Our friend Justine, is an experienced outdoor adventurer.  She has logged countless hours in the bush on dirt bike, horseback and sled.  If you are looking to tour the Sandilands, Justine is the guide you want!   Justine is an  avid musher and enjoys the companionship of her canines.   Recently she ran into a canine that she didn't enjoy so much,  a wolf!  We thought the story was one worth sharing.  Justine obliged.     Here is her story:

Close Encounter of the Wolf Kind

Story and photos by Justine Swaka


My “pups” and I love to get out to bikejor/scooter/sled and hike at least 3-4 times per week.  Our favourite trails are out at the Sandilands Provincial Forest, in Manitoba.  Here the dogs can run off leash and have the opportunity to smell all the great smells of the forest and swim in the many ponds.
We’ve come across many critters in the years that we’ve gone out there, including squirrels, sharp tail grouse, deer, bears, skunks and porcupines, among others.  Up until recently though, we had never crossed paths with a wolf. 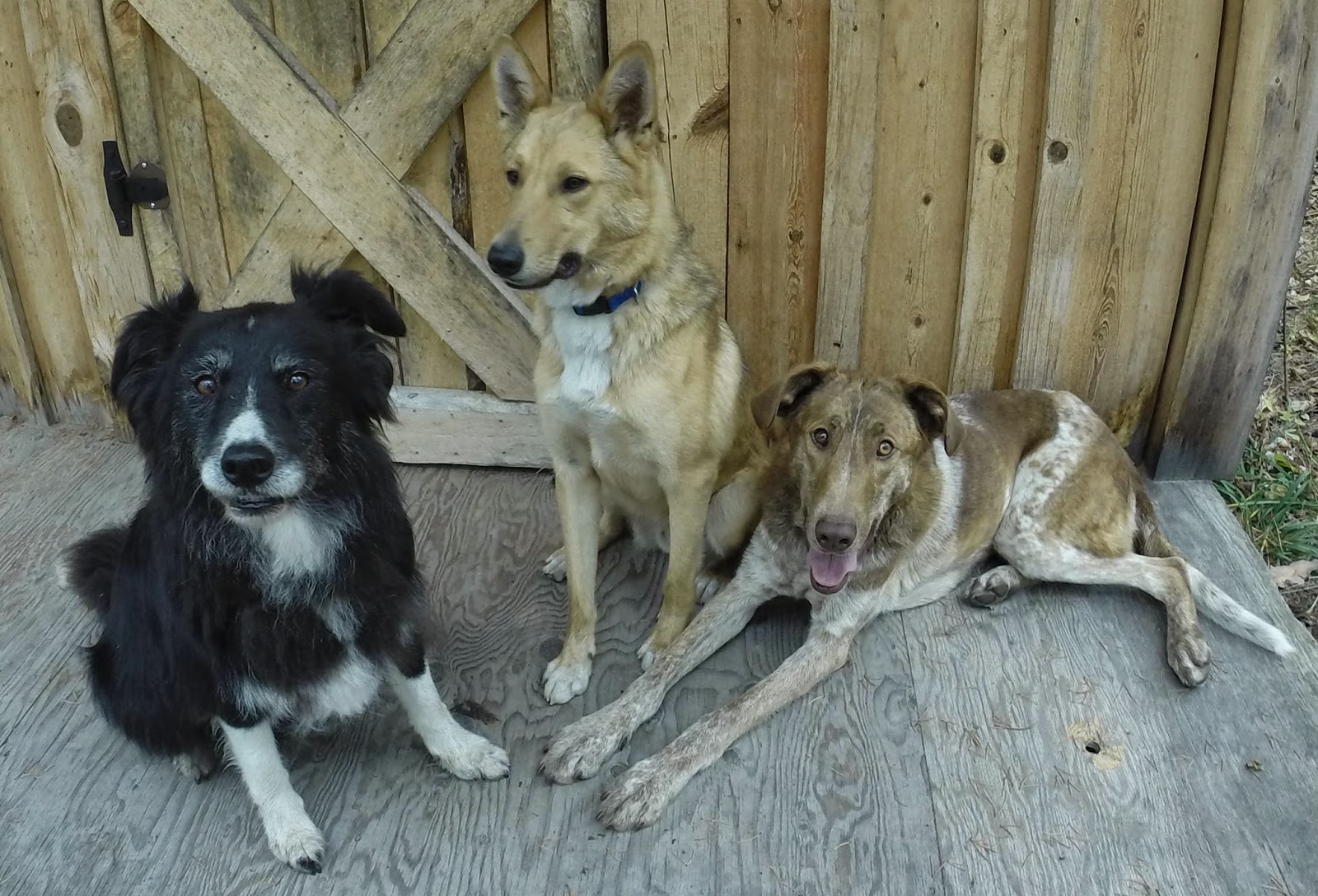 This particular day the dogs were off leash and not only did I have my three dogs, but also my son’s dog.  As I hiked down the fireguard road the dogs were off in the nearby bush and ponds.  I noticed a large animal up ahead on the trail and initially thought it may be a deer.
However, as I walked closer and closer I noticed that it did not run away as the deer usually do.
Instead, it turned to face me and stood his ground.  It was then I realized that it was a large wolf.
As I slowly walked towards it, I yelled and started banging my hiking poles together to get it to run off into the woods.
Instead of running away it did the opposite; it came trotting towards me with what looked like paws the size of dinner plates!
I continued to yell and bang my poles and hoping against hope that the dogs would not notice it.
As luck would have it we were walking upwind of the wolf and the dogs did not scent it, and they were too distracted by the scents of the bush and water to even notice the wolf.
I continued to slowly walk towards it knowing if I turned around and walked in the opposite direction that it could very well start following us.  I didn’t want it to see us as prey and although I only saw this one wolf there was a likelihood that he had his pack mates somewhere close by.  Eventually he did slink off back into the woods, but on my way back to my vehicle I kept a close eye on what was behind us.  He definitely was not afraid of humans and was in no hurry to go his own way.
During this time I had kept my husband informed of what was happening.  Needless to say he was worried about us getting safely back to the car which was an hour’s walk away.
All the years I had been going out to the bush, I had never really felt the need to have any kind of protection.  After this encounter though, I have taken the advice to at least get some bear spray.
The worry about the safety of my pack remains though…what would I have done if they had scented the wolf and run after it?  Though they have good recall, would the scent of the wolf and the chase have been enough to override the command to come back to me?
It’s a worrisome thought that remains with me now as we head out on our adventures. 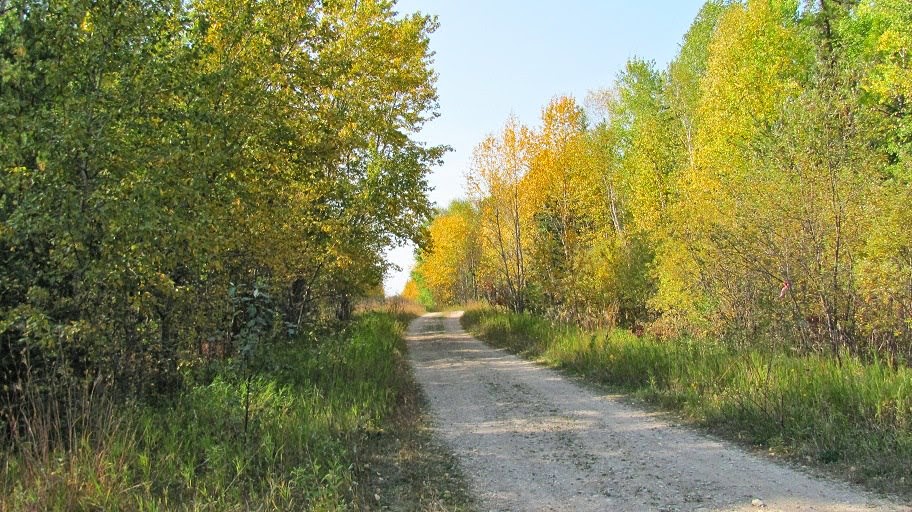 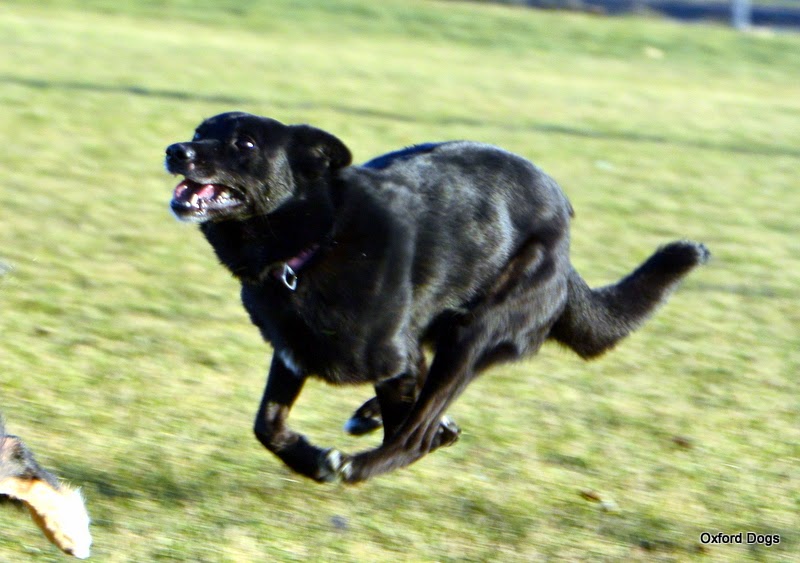 Above is a picture of Belle as she runs. Free. No harness, no leash.  Our dogs are obedience trained, and have excellent recall.  If they weren't, we couldn't safely let them off the leash!

What is free running?

Free Running refers to the practice of letting your pulling dog run free, off leash, no harness.  It's an important concept for dogs who pull.  In some ways, it's a bit of a vacation from the work of pulling.  Our dogs love to pull, but no matter how much you love your job, a break is always a healthy thing!

Free running allows for different pack dynamics than a regular, regulated sled pull or harness activity.  When our dogs are working, they are working.  Focused, eyes forward, dig their shoulders in and go!   They take their jobs seriously and work hard.  During a free run, the dogs are encouraged to play as they run together. Something that is never allowed when in harness!   This fast paced play time keeps their bond strong, but also serves to keep their mind sharp.  We see different pack dynamics at play here than we do when the dogs are on a gangline or at home.

Free Running as a Training Tool

Free running will also help with your training goals.  You can free run your dogs while you go for a jog, or a bike ride and build up your own endurance!
When you let the dogs free run, they will be building up their muscles and strengthen their cardio as well.   They will push themselves and each other, to run harder and faster.
Another benefit is that dogs that are allowed to free run, will be building and strengthening muscles in a way they would not otherwise be when pulling in harness.   Watch two dogs at play, as they twist, jump and wrestle.  How often can a dog exercise those muscles while in harness or on a leash?
﻿
Observe
When your dog is free running, this is your opportunity to observe and watch.  Look at your dog's usual gait.  Watch how they move and run, and handle corners and fast turns.
It is your job to know your dog, and to know when something is wrong.   For a dog with a sore toe, foot or leg,  running is often easier than walking for a dog.  As they are moving at a faster pace, they put less pressure on the affected appendage.   It is up to you to know your dog, and to see the slight difference when something may be wrong.   To the inexperienced eye, it might be assumed that because the dog is running, everything is fine.
By knowing your dog, and observing his movement in a free run, you can intervene and head off minor sprains and strains before they become much larger problems.

Now, get out there and Free Run and Play with your dogs!

What to do while you wait for the snow....

It's okay to be one of those people who walk around smiling like an idiot as soon as the temperatures start to get a bit chilly.    You are in good company!  We are excited for snow as well!

Just don't expect non-skijoring people to understand.  Those poor folk can only think of winter as a negative!   Well, you my friend know how to turn a negative (temperature) into a positive (adventure)!

Our topic is "What you can do while you wait for the snow.... Following these steps might help keep you from going crazy!  (Might)

1.  Go over all your gear.  Look over your skis, lines and harnesses.  How are the booties holding up?   Now is the time to replace or fix anything that was worn a little or broken from the last season.  There is nothing wrong with "accidentally" breaking a ski, so you can get that new pair you have had your eye on.  If you need new dog gear, order your gear now, before the mushing supply companies get really busy!

2.   Check excess baggage.   Thanksgiving is over, and all the Halloween candy is gone.   Which means it's time to get out there and get in shape!  Don't overdue it, but do, do it.   Focusing in on core strengthening exercises and cardio.  The better shape you start your season in, the more you will enjoy it!   Also check that Fido is fit,  your dog needs to be fit and trim for skijoring season as well.

3.   Start thinking about your goals for this season.   Will you be attending races or going on a new adventure?  Thinking about your season now, and planning for it will ensure that you will get the most of this winter.

4.   Brush up on your team work.  Take your dog out for a walk in harness, there's no need to go fast, and go over your basic skijoring commands.  How's that Line Out looking?  Shake the cobwebs off Gee and Haw.   Perfect that On-By.     The more you brush up on your training before the snow falls, the more time you have to enjoy yourselves once the snow falls.

5.  Foot Work.   Pay attention to your dog's feet.  Not just in the fall, but all season long.  Fall is the time to start condition your dogs paw pads for the snow.  Long walks on pavement, called "Roading" will help toughen up those pads.   Get your dog back in the habit of letting you inspect his feet.  Maybe make this a fun activity and do some foot work during doggie dinner time!    Be on the look out for any cracks, tears or split nails.

This should be enough to keep you busy, while you wait for the snow to fall in your area!
Posted by Unknown at 14:08 No comments: