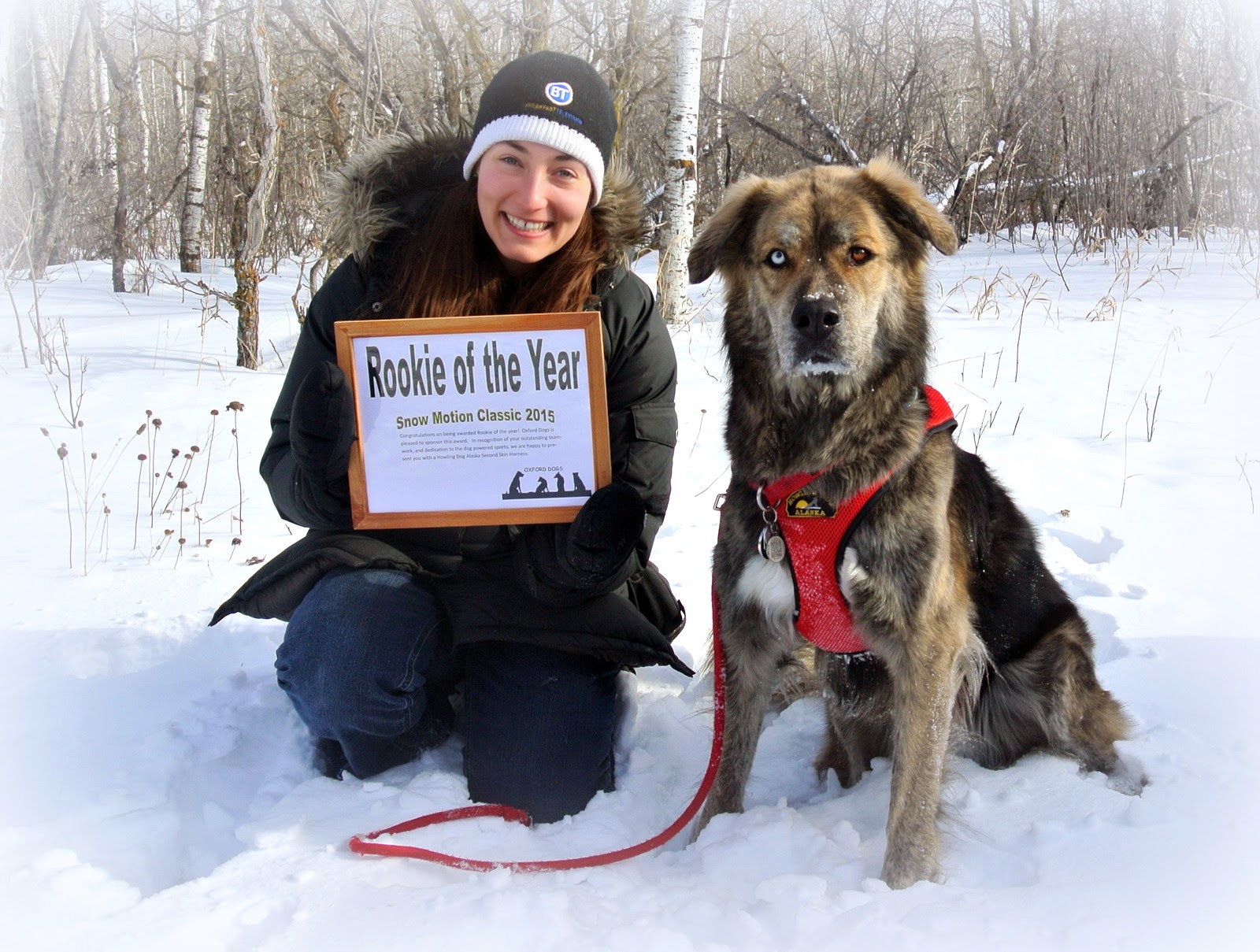 Tell us about your dog, Moose.
Moose is a rescue from Manitoba Mutts.  He was found wandering in a ditch outside of Miami, Manitoba when he was 3 months old.  We have no idea if he has siblings or what his breed is although it's safe to say he's quite the mix.  Moose is a pretty amazing dog.  He's calm, playful, likes to cuddle and is eager to please.  He gets along with almost any other dog but is content to explore on his own too.  But what makes him really wonderful for this sport is that he loves to chase and he doesn't mind pulling.  The trick now is to get him to pull without a chase.
How did you first get started in the sport?
I worked with an expert in the sport, Lorne Volk, when I was doing my practicum for teaching.  He would show the students pictures and videos.  I remember his eyes lit up when I said that I'd adopted a dog.  Everything fit into place after that.
What dog powered sports have you been involved with?
Skijoring is my first "dog-powered" sport although we take Moose with us everywhere including cycling, hiking, back-country camping and canoeing.
How did you know you were hooked on the sport?
I was hooked on the sport because Moose was.  It was a challenge at first.  I didn't know how to ski and Moose didn't know how to pull.  We had some pretty ridiculous crashes and entanglements.  I remember getting so excited when we first started to click as a team.  Now Moose loves skijoring and we're only getting better and better at it.
What other kinds of training have you done with your dogs?

Early on we knew that training was important with Moose especially since he is such a large dog.  We took him to obedience training when he was just a puppy and try to be very consistent with our behaviour expectations at home.

Matt (my fiancee) is helping with training year-round.  Every time we turn left, even when walking, we say "Haw" and every time we turn right we say "Gee".  This year, Moose has started to listen and respond to those calls!

What is your favorite piece of gear?

I started to sport using a short old pair of classic skis.  I wanted to make sure that this was a sport that we would both enjoy before buying expensive equipment.  I recently took the plunge and bought real skate ski equipment.  I'm having a good time with my new skis right now. 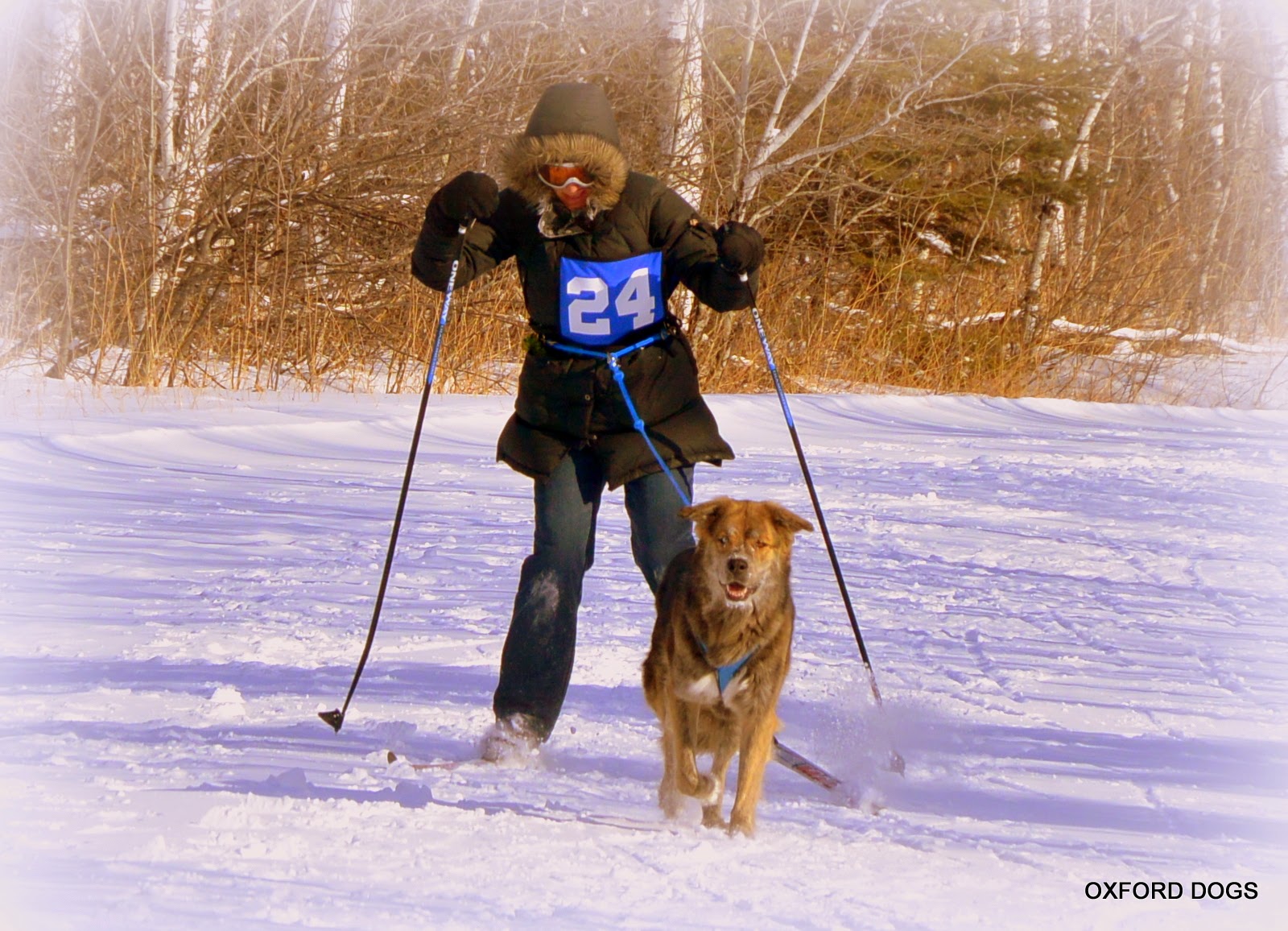 What is the best advice you have ever been given for mushing?

Get to know your dog.  If you can predict what your dog is going to do, then you can be proactive in either correcting or encouraging it.  Often it's when your dog surprises you that you end up biting the snow.
Why do you run your dog?
It's so important to exercise your dog.  If we weren't skijoring, we'd be going to the dog park or for a hike or cycle.  But with skijoring, we both get great exercise and we get to take advantage of the Winnipeg winter.   It also gives us a chance to really work together as a team.  I feel a lot closer to my dog when we skijor because we are relying on each other to make it work.  Moose loves it and so do I.
Posted by Unknown at 08:07 No comments:

Tamara MacLaren stops by to review the Tug-N-Tow for us.  Tamara has been involved in working with dogs and horses for more than 30 years and currently lives and runs dogs in and around the Fraser Valley of British Columbia.  She also enjoys traveling, hiking, and backpacking with the dogs, running marathons, and teaching running clinics when she isn't researching and writing.  Watch for her book on Urban Mushing in the near future.   Tamara, nor the Oxford Dogs have been compensated for this review.


Just behind me and to my left I heard Diana yell a hard “NO” and the sound of her scooter skidding to an immediate halt.  I called my own “Whoa” and hit the breaks to see what had happened.  Willa, my German Shepherd, and Takoa, my Alaskan Malamute, stopped immediately, and I looked back.
Diana's two dogs, a blonde athletic male lab and a black equally fit female lab mix were doubled back facing Diana and appeared to have been trying to head off the dyke.  Their lines were wound around the front wheel axle so tightly that neither dog could move.  I lay my scooter down, and went back to see if I could help.
Happily, Diana's dogs were calm, so we unhooked their harnesses and I held them while she attempted to extricate the line from the wheel.  Finally, with a wrench, the line came free, but in two pieces!  "
We weren't too far from the parking area, but scooters are not made to easily be person powered. I dug around in my bag, pulled out a leash, and knotted it into Diana's line to replace the damaged piece. We hooked up, and gently trotted back the remaining way to the parking area.


This kind of thing was a regular occurrence for me when I started dryland mushing with my dogs.  My Malamute would pull for a second to get moving, but then slack off.  In the moment between when he slacked off and when I used the breaks to take the slack back out of the line, the line would get into my wheel, under one of my break handles, etc.


Initially, I bought a “Scooter Noodle” from Alpine Outfitters to solve the problem.  The Scooter Noodle is basically a pool noodle about 1.5 feet long that you run your line through before attaching it to your scooter or bike.  There is a line at the dog end of the noodle that you attach to your handlebars, forming a triangle to hold the line up and away from your tire if the line goes slack.
This worked reasonably as long as the dog was in front, but as is often the case with dogs who are new to the sport, my dogs would often stop to the side or drop to check on me, bringing the slack line to the side.  Then the dog would spring ahead and the line and noodle would hook my breaks, flipping my handlebars to one side and me into the gravel, especially when on my bike where the handlebars are lower.  Not fun!

I spent time researching how to train my dogs out of this dangerous behavior and looking for how to prevent the intermittent slack from causing accidents and injuries to me.  I came across the Tug-N-Tow (http://www.tugntowbikeleash.com/).  The Tug-N-Tow works the same as a retractable leash attached to your bike or scooter.  Retractable leashes have been heavily denounced in recent years for using to walk dogs because it encourages the dogs to pull.  I thought, “Hmm – I want my dogs to pull”.


The Tug-N-Tow is a normal mushing line that attaches inside a housing that is mounted on your bike or scooter (or any vehicle you want to attach it to).  The housing uses an industrial strength spring to wind excess line around a spool inside the housing, keeping the slack out of the line.  When fully extended, the line is about 7 feet, the same as a normal line, but 5 feet of that is retractable, meaning that if the dog didn't pull at all, there would be enough line for the dog to be at the bike or scooter, possibly even getting a bump from the tire, but still not enough slack for the line to get into the wheel.  This sounded good.


I asked if other people who had bought it where happy with it and the resounding response was that not only were they happy with it, but everyone in their mushing club had switched to using them – a strong recommendation.  I was concerned that perhaps the Tug-N-Tows would break under hard use but I couldn't find anyone who's Tug-N-Tow had broken.
In looking at the Tug-N-Tow web site, there was instructions on how to replace the lines and even the retraction spring as well as information on extensive testing they do to ensure that the Tug-N-Tow stands up to the rigors of dryland mushing and then some!


I ordered a Tug-N-Tow from the web site and was shocked when it arrived only a few days later.  I had mine delivered to a US mailing address since I live very close to the US border, so I don't know how much extra time the border crossing would add if having it shipped to Canada.


I grabbed an adjustable wrench and quickly installed the Tug-N-Tow on my scooter, harnessed the Malamute, and off we went to give it a try. 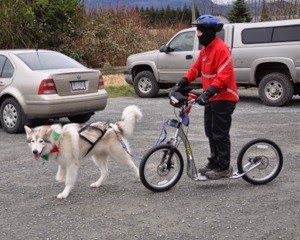 The effect was immediate and entertaining.  As before, the Malamute gave a few steps of pulling to get us moving, then attempted to slow down to relieve the tension on the line.  The line retracted and the line stayed tight.  He stopped and the line stayed tight.
My husband was on his bike ahead, so the Malamute had a great deal of motivation to move forward.  So he moved out again, attempting again to slow after the first few steps to relieve the line tension.  Since this strategy no longer worked and my husband was getting away, he stopped trying to relieve the tension and just kept going, picking up speed to catch up.
It was like a miracle and I was forever in love with my Tug-N-Tow! 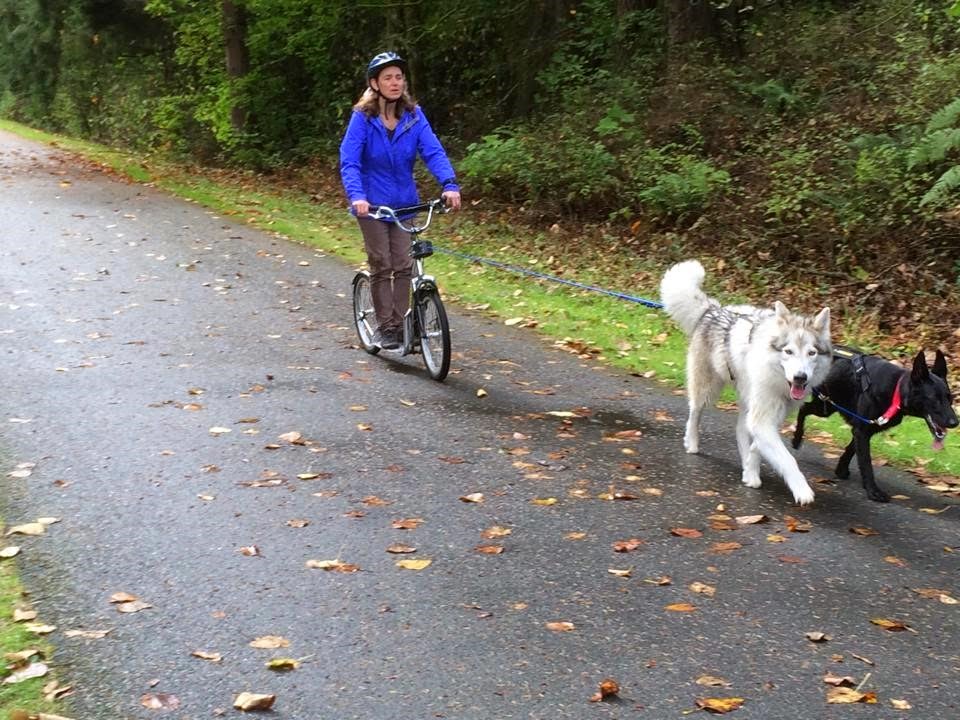 My only complaint and it is a minor one, is the bungee loop arrangement.  Their is a bungee loop between the main recoiling line and the tugs that go to the dog harnesses.  Without tension on the line, the loop has a tendency to open, and the first time I took out my newly installed Tug-N-Tow on my bike, the Malamute was goofing around, coming beside me for a moment.  I use heavy-tread mountain bike tires on my bike, and as the bungee sagged, it caught on the tire tread, immediately halting my bike, and flipping me off onto my knees.  I swapped the bungee and tug section of the line out for an inline bungee tug and haven't had the problem since.  Putting a knot in the bungee loop to hold it closed would accomplish the same thing.


If you are running multiple dogs, the slack line becomes less of a problem and at least one of them is always pulling, but when you only run one or two dogs, the Tug-N-Tow is the best solution I have found, both as a training tool, and for fundamental safety while out running the dogs.  I highly recommend it. 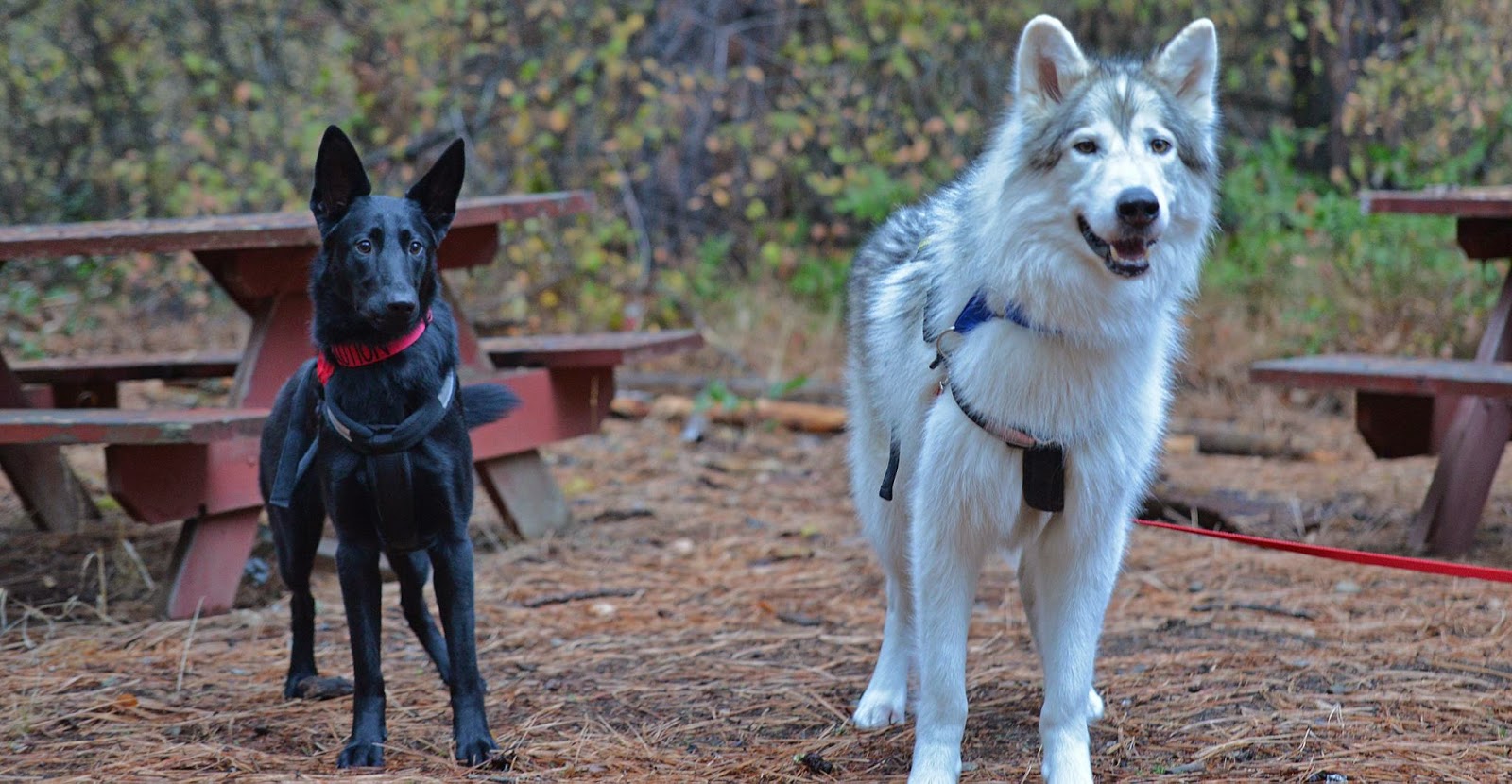 Thanks Tamara!
Click here for my review on the Tug-N-Tow.
Have you used the Tug-N-Tow?
Let us know on the comment section what you think!
Posted by Unknown at 06:47 No comments: